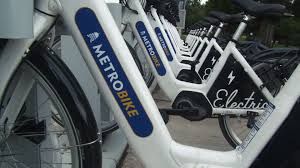 MetroBike: the Bike Share you Love, with a New Name and New Features!

You may have noticed some changes on Austin streets - the bright red Austin BCycle bikes, under a new management partnership between the city of Austin and Capital Metro, have been rebranded to sport a new color and logo as MetroBike. The current B-Cycle app has also been integrated with Capital Metro's app, which means you can buy passes for the bikes through both apps.

The update follows the new partnership approved in June between Capital Metro and the city of Austin to use the bikeshare system to improve its connection to transit and aid the long-term mobility goals laid out in the Austin Strategic Mobility Plan.

The rebrand is the first step of multiple future service improvements such as:

Bike riding has increased under COVID-19 shelter-in-place orders throughout the nation, and e-bikes have been used at rates 3 to 4.5 times more frequently than the regular pedal bikes. More than 200 e-bikes are on loan in Austin from BCycle/Trek as a pilot project demonstrating the increased use of the system when e-bikes are available to riders.

“The expansion and electrification of Austin’s bikeshare system is an ideal counterpart to Capital Metro’s expanding transit system, as well as the growing bicycling infrastructure across the city,” said Sharmila Mukherjee, Capital Metro Executive Vice President of Planning and Development. “This partnership with the City of Austin and Austin BCycle is a key asset for our community and a great support for broader transportation and mobility options that work well together. With bicycle ridership increasing across the nation, the collaboration couldn’t come at a better time.”